What does HILIC mean? 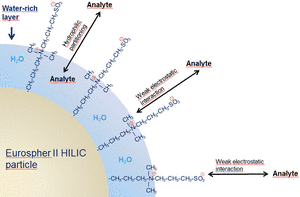 This leads to the retardation of polar and hydrophilic compounds like Uracil for example, which is used as a non retarded dead time marker in reversed phase HPLC. Unpolar compounds like Toluol for example are not retarded and can be used as a dead time marker in HILIC. This leads to HILIC having an elution order that is often inverse compared to reversed phase separations.

We separate molecules and unite people.

Based in Berlin, KNAUER has been serving the sciences since 1962. We develop and manufacture scientific instruments of superior quality for liquid chromatography systems and components, including:

We are an established partner in science. Today and in the future.​​​​​​

Do you need more information?